nox.im · All Posts · All in Anthropology · All in Mental Models

The red queen hypothesis was named after the book “Through the Looking-Glass” by Lewis Carroll. The quote goes as follows, “It takes all the running you can do to keep in the same place”. This analogy can be used in a variety of contexts. Bear with me as we go from molecular arms races, to genetics, up to the evolution of sex. We’re trying as fast as possible to evolve and when we do, we’re still stuck in the same place since we’re still competing. 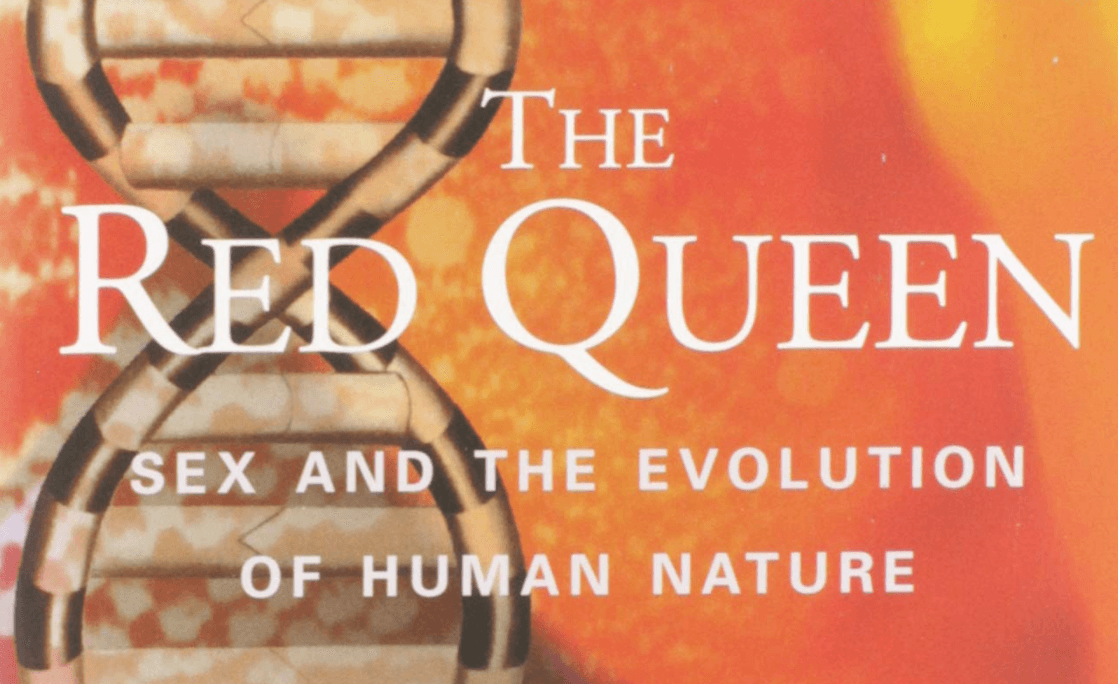 For an evolutionary system, continuing development is needed just in order to maintain its fitness relative to the systems it is co-evolving with – Leigh Van Valen

Richard Dawkins called it “the immortal gene”. There are indeed some genes that are identical to what they have been tens of millions of years ago. The difference between a successful gene and an unsuccessful gene really matters. For us, quite possibly for tens of millions of years. Dawkins called any individual organism a “throwaway survival machine”. This is to be understood from the point of the genes that the organisms carry on through its offspring and generations. Even more interesting is the fact that there are in fact no true human genes. All mammals share the same 21,000 or so.

Every one of us who is here today, is in an unbroken lineage of ancestors. We are carrying genes in us through the histories, because these genes were and are still “good enough” at what they are doing to survive. This in itself is an inspiring vision.

The red queen hypothesis states, that the primary driver behind evolution is the struggle to survive, rather than environmental forces. Organisms within our environment must persistently adapt and evolve to survive. Evolving organisms are constantly competing against other organisms.

Matt Ridley discusses in his book with the very title “The Red Queen”, how the need for biological defense against parasites, possibly drove evolution. He speculates that this may have even been the very reason for why sexual reproduction evolved in the first place as opposed to asexual reproduction. Ridley accepts the “selfish gene theory” and uses it as one of the basis for the red queen hypothesis of evolution. It should be pointed out that the theory contradicts conventional perspectives in biology and evolution and argues that life is best understood from the genetic perspective as opposed to the organismal perspective.

In order to understand this point of view, we have to consider early organisms and how they reproduced. Organisms that reproduce asexually, evolve by random mutations, but are otherwise clones. They’re adapted to their environment and don’t need to find a mate. They have a very fast reproduction process, without adapting to parasites and other defects. Too fast reproduction can also be negative, as it can lead to overpopulation much faster than sexual reproducing organisms.

Sexual reproduction persists, because it enables species to evolve new genetic defenses against parasites and defects. Sexual reproduction can get away slow mutation rates as they can quickly produce a variety of characteristics in offspring. Parasites and defects are not harmful and fast enough, to harm the host they inhabit. Such species have to invest time and energy however to find a mate.

Therefore sex and gender exist, because it increases the efficiency of evolutionary adaptation. Sex allows the best traits to be discovered by random mutation, to be exchanged, collected, and carried forward.

If organisms are always competing for resources, then those species that can increase their population size most quickly will have an advantage.

The red queen hypothesis can be applied to business in the sense that if a business makes the same product all the time, they will lose customers and market share. Customers want “new” things. However, often it is enough to temporarily win, to make an historical impact for the lifetimes of us humans in the field of business.

In any case, the mixing of ideas to create something new is an absolutely essential feature of economic progress. As if none ever created anything new, we wouldn’t be where we are today. This very basic concept is in fact a biological idea at its core.

The red queen hypothesis can also be used to explain human behavior and especially sexual and mating practices.

It is actually very difficult to say what natural mating in our species of humans should look like. The model of “sexual selection” evolved as part of what we call natural selection. Some individuals have greater reproductive success than others within a population. For example, because they are more attractive or prefer more attractive partners to produce offspring. Successful males benefit from frequent mating and monopolizing access to one or more fertile females. Females can have a limited number of offspring and maximize the return on the energy they invest in reproduction. This leads to competition with members of the same sex for access to members of the opposite sex.

We humans operate however in a system of monogamy with adultery present. There are evolutionary selective advantages to both practices, so both practices co-exist. While we are a pair bonding species, it doesn’t necessarily mean that females consider singular males being the only father of her children if she can acquire “better genes”.

It is also interesting to recognize that each gender is in a different situation. Primarily due to women being pregnant for 9 months and consequently need to care for helpless offspring for many years. This translates into different cost benefit trade-offs. The trade-offs translate into different optimal strategies for mate attraction and mate selection. Evolution has hard wired these behavioral strategies into our brains, making them difficult for us to evade.

Male ambition, to succeed in life, is all about getting ahead in the red queen race with respect to mate choice.

Morality comes from both our animal past and our more recent human past. Individual behavior of the rational kind, leads to a collective irrational outcome. This concept is referred to the “The tragedy of the commons”. The free rider wins at the expense of the good citizen. This is also a fundamental argument against communism and a reason of why it fails. Society, organized on the principle “from each according to his ability, to each according to his needs”, makes no one work hard for a system, that doesn’t reward him for the fruits of his labour.

On another note, our more recent environment requires us to “be nice”. Virtue equals cooperative behavior. Society has created strong pressure to spot and ostracize anti social people and reward pro social people. Societal norms try to force us into a mode of behavior, even if this means going against our own nature.

Life in itself is a positive sum game. Stop thinking in terms of winners and losers.